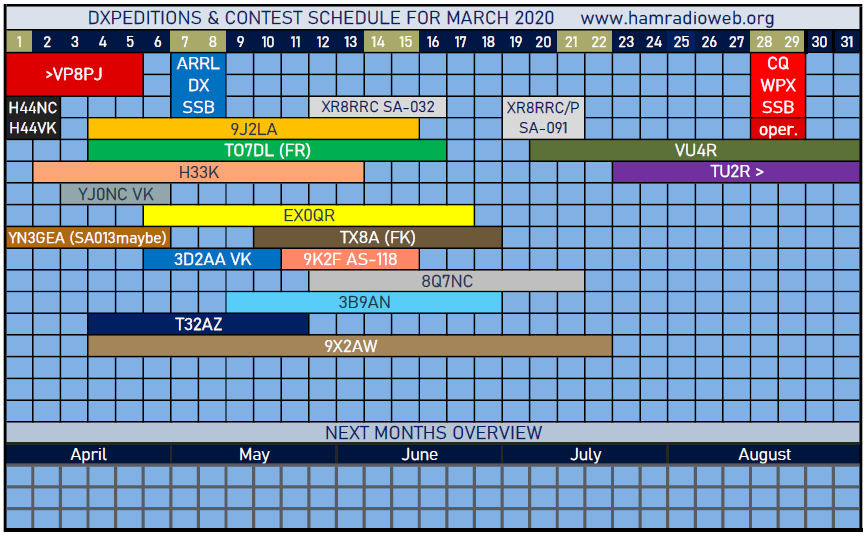 CT9 - Once again Rosel, DL3KWR and Hardy, DL3KWF will be active as CT9/DL3KWR and CT9/DL3KWF from Madeira (AF-014) from 6 March to 1 April. They will operate mainly CW and some FT8 on the HF bands.
QSL via home calls (bureau preferred), LoTW and eQSL.

FS - TO0A is the callsign that FS4WBS and others will be using from St.Martin (NA-105) during the ARRL DX SSB Contest. QSL via LoTW.

OE - Several Austrian stations (OE25AVD, OE25BKC, OE25DMT, OE25JWC and OE25XOA to name a few) will be using the special prefix OE25 from 1 March to 31 December to mark the 25th anniversary since Austria acceded to the European Union. QSL via operator's instructions.

ZF - Joel, NF3R will be active as ZF2RJ from the Cayman Islands (NA-016) on 3-10 March. Main activity will be during the ARRL DX SSB Contest; before and after the contest he will operate SSB and the WSJT-X modes on 40-6 metres. The log will be upoloaded to LoTW and Club Log.

IOTA HONOUR ROLL ---> The 2020 Honour Roll and Annual Listings have been posted on the IOTA website https://iota-world.org/: click on PERFORMANCE LISTINGS in the dropdown menu under PROGRAMME INFORMATION. They show the position as at 31 January 2020.
The Honour Roll lists the stations with a checked score equalling or exceeding 50% of the total of numbered IOTA groups, excluding those with provisional numbers, at the time of preparation. The Annual Listing lists the stations with a checked score of 100 or more IOTA groups but less than the qualifying threshold for entry into the Honour Roll. IOTA rules limit inclusion in the listings to those participants who have updated their scores at least once in the preceding five years (i.e. since February 2015) and have opted to have their scores published.

W8S: NEW DATES ---> The DXpedition to Swains Island has been postponed because of the travel restrictions imposed by the Department of Health of American Samoa as a result of the coronavirus outbreak . The team is now scheluded to be on the island from 23 September until 6 October. Bookmark https://swains2020.lldxt.eu/ for updates.