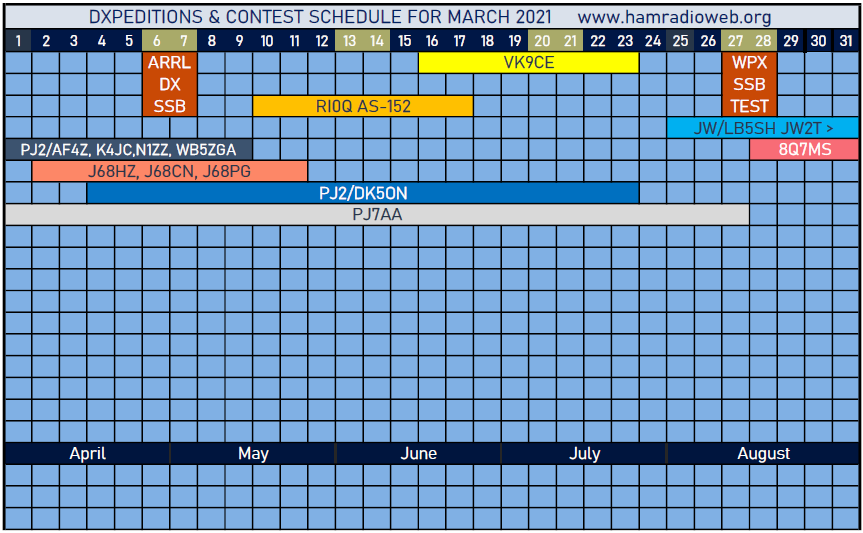 3D2, FIJI (New Ham). Joanna "JK", 3D2ZK, from Denarau, Nadi, Fiji, posted the following on QRZ.com [edited], "I'm very new to the HAM radio family. Please be patient when you hear me. I finished Jagielonica Law University in Krakow, Poland. I am a living rebel, so I joined forces with Rebel DX
Group. My plan is to be active from 3D2/C (Conway Reef), 3D2/R (Rotuma Island) and several rare IOTAs around Fiji from May 2021 for 3-4 months."
No QSNs have been reported yet.

4U1U, UNITED NATIONS. From the FaceBook page of the United Nations Amateur Radio Club (4U1UN); they posted on March 9th: To all the stations calling but couldn't get through, we apologize. The noise floor at UNHQ is often S9, sometimes +10 over. That's the issue of having a vertical 450 feet up in the middle of Manhattan!

CN - Special event station CN21JIF will be active on 19-22 March from Ourika Valley in the Moroccan High Atlas. QSL via RW6HS. The suffix stands for Journee Internationale des Forets, the International Day of Forests established by the UN General Assembly and observed annually
on 21 March.

F - Special callsign TM150PAR will be active for fifteen days between 20 March and 16 May to mark the 150th anniversary of the Paris Commune, the revolutionary government that ruled Paris (18 March-28 May 1871) and had significant influence on the ideas of Karl Marx.
QSL via F4HZS.

FM, MARTINIQUE (NA-107). Laurent, FM5BH, will be active during the CQWW IWPX SSB Contest (March 27-28th) as a Single-Op/All-Band/High-Power entry. QSL via W3HNK or LoTW. PLEASE no dupes. Checkout the FM5BH Contest Station (Rental) on the Web at: http://www.fm5bh.com

FS - Barring Covid-related restrictions, Janusz, SP9FIH will be active as TO1K from Saint Martin (NA-105) from 22 March to 5 April. QSL via Club Log's OQRS, or via home call. Updates will be posted to http://fs.dxpeditions.org/.

GB0, ENGLAND (Special Event). Members of the Welland Valley ARS will be activating several stations on air during 2021 to celebrate the Patron Saints of England, Ireland, Scotland and Wales. (See OPDX.1503) This week they will celebrate St. Patrick's Day (March 17th) with the callsign GB0SP between March 16-18th. QSL via G4XEX.

GB100, WALES. John, MW1CFN, will be active as GB1004FTS from Anglesey Island (EU-005), island off the mainland's northwest coast, between March 25th and April 8th. Operations will be on various HF bands including 6 and 2 meters using SSB and the Digital modes. Activity is to celebrate the 100th anniversary of the Royal Air Force's No. 4 Flying Training School which opened up on April 1st, 1921. QSL via MW1CFN direct.

GW - John, MW1CFN will be active as GB1004FTS from Anglesey (EU-005) between 25 March and 8 April. He will operate SSB and digital modes on the HF bands, 6 and 2m. QSL via LoTW or direct. The special callsign celebrates the 100th anniversary of the Royal Air Force's
No. 4 Flying Training School, opened on 1 April 1921.

H7, NICARAGUA. Myron, KN6GHM, will be active as H7/KN6GHM from Guana- castillo during the CQWW WPX SSB Contest (March 27-28th). QSL via his home callsign, direct, eQSL or LoTW.

I - Celebrating the 1600th anniversary of the founding of Venice, traditionally set on 25 March 421, and the 75th anniversary of ARI Venezia (http://www.arivenezia.it/), II3VE and IQ3VE will be active on various bands and modes from 15 March to 30 November. QSLs via the bureau.

OH - The SSAB Raahe Amateur Radio Club (OH8SSAB) will be active as OF60RR until 1 March 2022 to celebrate the 60th anniversary of the Rautaruukki steel plant. QSL via the bureau, or direct to OH8DR.

PA96, THE NETHERLANDS (Special Event). Alex, PA1AW, will be active with the special callsign PA96WARD celebrating "World Amateur Radio Day 2021" (WARD) on April 18th. It was on April 18th, 1925, that the International Amateur Radio Union (IARU) was formed in Paris. QSL via PA1AW.

PY - Special callsign PQ213CFN will be active on 5-31 March to celebrate the 213rd anniversary of the Brazilian Marine Corps, which traces its origin to March 1808. QSL via LoTW; logsearch on Club Log. A certificate will be available for download: http://www.gcen.org.br/ (after 10 April).

PY - Special callsigns ZZ5FLN and ZZ5FLORIPA will be active on 16-23 March to commemorate the 348th anniversary of the city of Florianopolis, the capital of the Brazilian state of Santa Catarina.
A certificate will be available; see qrz.com for information.

R7, RUSSIA (Republic of Ingushetia). Operators Tim/R7QR, RA3ATX/RA3ATX, Dmitry/RA9USU, YL Elena/RC5A and Mussa/UA6QB will be active as R7QR from the Republic of Ingushetia (separate P-150-C entity) during next week's Russian DX Contest (RDXC) (March 20-21st) as a Multi-Single or Multi-2 entry. QSL via eQSL or LoTW. Ingushetia is the smallest region of the Russian Federation, not counting federal cities. The length of the republic from north to south is 144 km, from west to east - 72 km. Because of the territorial disputes the exact area of Ingushetia is unknown, in most
cases it varies from about 3,400 to 3,700 square kilometers.
For more details, see: https://www.qrz.com/lookup/R7QR
https://en.wikipedia.org/wiki/Ingushetia

SO100, POLAND (Special Event). Members of the Piastowski Klub Krótkofalowców (SP6PAZ-SN6O) will activate the special event callsign SO100PS between May 1-31st. Activity is to celebrate the 100th anniversary of the "Third Silesian Uprising - 1921-2021". Operations will be on 160/80/40/30/20/17/15/12/10/2 meters using CW, SSB, RTTY and FT8/FT4. Operators mentioned
are Krzysztof/SP6DVP, Andrzej/SP6GCU, Janek/SP6IHE, Bogdan/SP6LUV, Jarek/SP6OJK, Andrzej/SP6RTX, Slawek/SP6ZC, and Boguslaw/SQ6NDC. QSL via SP6PAZ, by the PZK Bureau, direct, ClubLog or LoTW. A special diploma is available.
Details available at: https://logsp.pzk.org.pl/index.php?page=award&id=88

TO1, ST. MARTIN. Janusz, SP9FIH, is expected to be active as TO1K from Saint Martin Island (NA-105) between March 22nd and April 5th. This all depends on Covid-19 travel restrictions. Activity is usually on 160-10 meters using SSB, RTTY and FT8. QSL via SP9FIH or ClubLog's OQRS. Look
for updates at: http://fs.dxpeditions.org

UA - Look for Mikhail, R1MJ and Yulia, R1CBL to be active from Verperluda Island (EU-133) starting around 9 UTC on 13 March until around 11 UTC on the 14th. They will operate mainly SSB on 40 and 20m. QSL via home calls, direct or bureau.

VK9HR WILLIS ISLAND DXPEDITION (Status Update). The following press release
was sent out by Ed, VK2JI, on March 10th [edited]:
I am glad to report on behalf of the group, that all is going well and
all is on schedule for November. Please add this into your calendars:
* The boat is chartered to leave Australia on November 3rd returning November 13th.
* Plans are being made around what equipment to take.
* The team is growing, the latest new member being Allan, VK6CQ, representing Western Australia.
* Coverage is planned for 160m through 10m on SSB/CW/Digital (6 meters being considered if time & equipment allows).
Details about location:
* Willis Island is currently No. 38 on the ClubLog most wanted list
* DXCC Country - Willis Islets
* WAZ zone - CQ 30.
* ITU Zone - 55.
* RSGB IOTA - OC-007.
* QTH Locator - QH43
This DX'Pedition is being organized and run by the Hellenic Amateur Radio Association of Australia.
HARAOA website: www.haraoa.com
73, Ed, VK2JI, Publicity Officer VK9HR Willis Island DX'Pedition.

ZW61, BRAZIL (Special Event). Members of the LABRE-DF (PT2AAA) will activate the special event callsign ZW61DF to commemorate the 61st anniversary of the founding of Brasília, the Brazilian capital. Activity will be between April 1-30th. Operations will be on CW, SSB and FT8.
The QSL Manager is PT2GTI. Paper QSL via Bureau or direct with SAE + 2GS.

AS-081. Sungki, HL1IWD, will be active as HL1IWD/5 from Koje Island between April 2-4th. Activity will be holiday style and during his spare time on 40/20 meters using mainly CW, with some FT8.
Equipment is a IC-706MK2 into a Buddipole antenna. QSL via EA5GL and QSLs will be sent via the Bureau after the operation.

AS-152. (Reminder) Members of the Arctic Legends Team (RT9K), are expected to be active as RI0Q from Bolshoj Begichev Island soon (possibly March 17th). The team headed to the island on March 11th. To achieve their goal to operate from Bolshoj Begichev Island, the team has to travel 3624 km (by snowmobiles 1812 km*2). For more details, see: https://www.qrz.com/DB/RI0Q
https://legendsarctic.com/dnevnik_ekspedicii_ri0b_2_2
Pictures/Videos/Details are also available on Igor's (UA9KDF)
Twitter page at: https://twitter.com/ua9kdf

EU-123. Col, MM0NDX, reports that the MS0INT DXpedition Bass Rock is still on. The team consists of Declan/EI6FR, Col/MM0NDX, Jonathan/MM0OKG and a cameraman. The tentative dates are the
weekend of April 17-18th, 2021.

EU-133. Operators Mike/R1MJ and Julia/R1CBL were expected to be active as R1MJ/p and R1CBL/p from Verperluda Island this past weekend (March 13-14th). However, as of print time, we saw no QSNs. QSL via their home callsigns or LoTW. LAST MINUTE UPDATE: Eugene, RZ3EC, reports: "Expedition has been postponed. They had to evacuate because of the bad weather."

NA-048. Operators DJ/N4RRR, Jack/K4KSW, Terry/N4QBS and Jack/NN2T will be active as C6AHA from Bimini Island (USI FL05) between July 14-21st. Activity will be on 160-10 meters using CW, SSB and FT8. They expect to possibly have 5 radios using "beams - Hy-Gain TH3-MK4, Cushcraft MA5B, 40/80m Delta loops and Verticals. Their goal is to aim for Europe and Australia (for those who need them for the DXCC), and others that need the grid or island. DJ states, "I know it's not a Rare DX but it is a rare Island & grid. Great DxPedition for us Handi-hams and a vacation for the wife with the Covid restrictions going on."

OC-268. By the time you read this, operators Ravie/YD7RV and Mas Jok/YD7HKV will be on the air from the island group called Laut Kecil Islands. Callsigns mentioned are YD7RV/P and YD7HKV/P.
They were expected to activate Marabatua Islands; Moresses Islands first on March 13th, on SSB, FT8 and (DV if possible). On March 14th, they will operate from Payongpayongan Island (same modes). Then on March 15th, they plan to activate and use a special callsign from Denawang Islands (Denawan National Park), a turtle conservation and breeding place.
QSL Manager is EA5GL.

What is a HAM Mesh Network
https://www.dxzone.com/dx34301/what-is-a-ham-mesh-network.html

RI0Q ---> The complete RI0Q team assembled at Noril'sk-Talnach and resumed the journey on 11 March. At 13 UTC on 12 March there were near the village of Volochanka, with still some 700 km as the crow flies for the snowmobiles convoy to drive before they reach their final destination (Bol'shoy Begichev Island, AS-152). See https://maps.findmespot.com/s/BG5T#live/assets.

ITALIAN SETTLER SPECIAL EVENT. To commemorate the 117th anniversary of the arrival of Italian settlers and the foundation of the locality of Capitan Pastene in southern Chile (Nova Italia at its beginnings), look for the following stations to be active between March 12-28th:
*II4CPC -- Operated by Associazione Radioamatoriitaliani, Carpi Section, Modena, ITALY
*LU6DK/D -- Operated by the Radio Club Dolores, Buenos Aires, Argentina
*CB6I -- Operated for the Radio Club Traiguén, CHILE
Three special certificates will be available (see QRZ.com). QSLs can be sent direct to: RADIO CLUB TRAIGUÉN, Box N. 150 - CP 4730000, TRAIGUÉN, CHILE. QSL via the Bureau to IQ4DJ.

NEW CQ WPX ACTIVITY MAP. Randy, K5ZD, CQ WPX Web Manager, posted the following [edited]: "We are always looking for new and interesting ways to present the results of the CQ WPX Contest. Thanks to the efforts of Tom Morrison, K5TM, we can now display the number of entries over the
past 10 years from each DX entity in a visual form on a world map. The new CQ WPX Activity Map is available at: https://cqwpx.com/maps
The map shows the number of log entries from each country and each call area for USA, Canada, Japan and Russia. The mode and year is selected by the drop down menu at the top right of the map. The map color scheme is selected just below that. The map legend describes the color code.
Moving the mouse over a country or clicking on it will show the number of entries for that region. Enjoy! And let us know what you think.