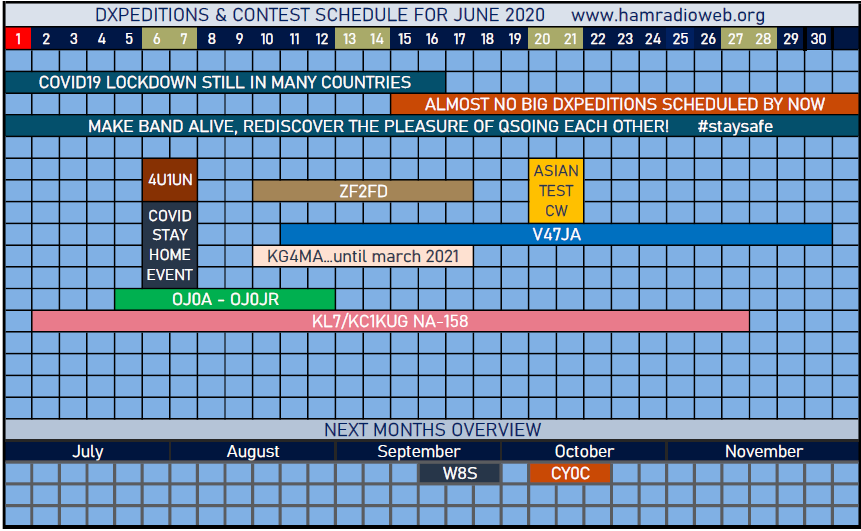 DL - DARC's local branch D13 (Maerkisches Viertel) will operate special callsign DL73TXL from 1 July until 30 June 2021 to say goodbye to BerlinTegel Airport (IATA code TXL), the main international airport of Berlin, which is expected to close permanently in early November. Along with Gatow and Tempelhof, it played a pivotal role during the Berlin Airlift (1948-1949), organized by the Western Allies to carry supplies to the people of West Berlin.

G - GB13COL is the special callsign for the Durham District and Amateur Radio Society to participate in the "13 Colonies Special Event" (from 13 UTC on 1 July until 4 UTC on 8 July) as a "bonus station". QSL via eQSL, or direct to G0VLF.

G - Larry, G4HLN will be active as GB100GKU on 1-28 July to commemorate the 100th anniversary of the long-range maritime radio service in the United Kingdom. He will operate mainly CW on the HF bands. QSL via the bureau. GKU was the callsign of the first long-range maritime radio station in the UK, opened in 1920 from a site at Devizes, Wiltshire. It operated on long-wave frequencies and mainly worked the transatlantic liners.
GB0 - WALES (Special Event). Members of the North Wales Amateur Radio Group and Eryri DX group are now active from the Welsh Mountain Zoo (situated in Colwyn Bay on the North Wales coast; http://www.welshmountainzoo.org/) using the special callsign GB0WMZ until July 17th. QSL via MW0JWP by the Bureau.
GB100 - ENGLAND (Special Event). Members of the Royal Signals Amateur Radio Society (RSARS) are celebrating their 100th anniversary by using the special callsign GB100RS between June 28th and the end of October. Activity will be on various HF bands using CW, SSB, RTTY and PSK. Special awards are available. See: https://rsars.org.uk/rsars-corps-celebrations-2020 QSL via the Bureau.

I - Members of the Italian Naval Old Rhythmers Club (www.inorc.it) will be active as II0ICEH from 18 July to 1 August. They will operate only CW. All QSOs will be confirmed automatically via the bureau. A certificate will be available; see https://www.qrz.com/db/II0ICEH
for information. ICEH was the callsign of the Italian ocean liner "Andrea Doria", most famous for her sinking on 26 July 1956, after the Swedish MS "Stockholm" collided with her off the coast of Nantucket, Massachusetts.

W - The following stations will be active during the 12th annual "13 Colonies Special Event", which will be held from 13 UTC on 1 July until 4 UTC on 8 July: K2A (New York), K2B (Virginia), K2C (Rhode Island), K2D (Connecticut), K2E (Delaware), K2F (Maryland), K2G (Georgia), K2H (Massachusetts), K2I (New Jersey), K2J (North Carolina), K2K (New Hampshire), K2L (South Carolina), and K2M (Pennsylvania), plus "bonus station" WM3PEN from Philadelphia (the city where the US independence was declared). Information about the award programme can be found on http://www.13colonies.us/.

YJ - Celebrating the 40th anniversary of the establishment of the independent Republic of Vanuatu, special event callsign YJ40IND will be active on 1-30 July. The operators will be Rod YJ8RN (FT8), Estelle YJ8ED (SSB) and Colin YJ8CW (CW). They will be QRV in their spare time, mostly around 6-10 UTC, with more activity during the week-ends. QSL route TBA.

EU-090. Operators Silvo/S50X, Goran/S52P, Hubert/S53Z, Milan/S58MU, Gordan/DM7AA and Mato/9A3SM will be active as 9A/callsign (except 9A3SM) from the Palagruza Islands between July 18-31st. Activity wil be on 80-10 meters using CW and SSB. The group will use the callsign 9A20A during the RSGB IOTA Contest (July 25-26th)[rare multiplier]. The QSL Manager for all callsigns will be S58MU (direct or by the Bureau). The logs will be uploaded to LoTW and eQSL. See QRZ.com for more details.

YASME SUPPORTING GRANT TO RBN ---> The Board of Directors of The Yasme Foundation (http://www.yasme.org/) has made a supporting grant to establish Reverse Beacon Network (RBN) nodes in Algeria, Tunisia and Libya. The project will be carried out by youth in the ARA (Amateurs Radio Algeriens) and ARAT (Association des Radio Amateurs Tunisiens) radio clubs. The build out of these nodes will increase RBN presence in Africa for both the amateur and
scientific communities. The Reverse Beacon Network is a network of global Software Defined Radio (SDR) receivers, monitoring amateur radio bands and reporting CW, RTTY, and FT8 signals to a central database at http://www.reversebeacon.net/.