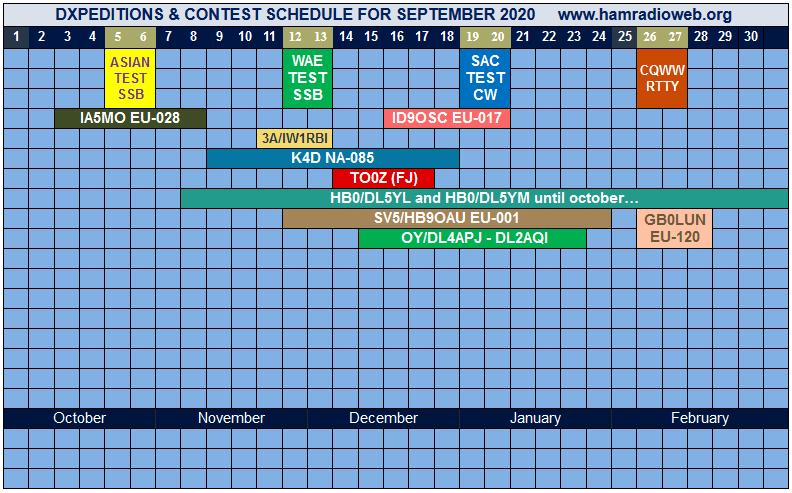 3V8, TUNISIA. Operator SWL Ashraf "Ash", 3V4-002 (KF5EYY) will be active as 3V8SS from the "Radio Club Station of Tunisian Scouts" in Sousse during the CQWW DX RTTY Contest (September 26-27th) as a Single-Op/All-Band/LowPower entry. QSL via LoTW or LX1NO. Read about Ashraf on the following Web page at: http://www.kf5eyy.info

4L, GEORGIA. Vaho, 4L8A, will be active from Tbilisi during the CQWW DX RTTY Contest (September 26-27th) as a Single-Op/Single-Band entry. QSL via M0OXO, direct, OQRS or LoTW.

8I69, INDONESIA (Special Event). Members of the ORARI Lokal Kulon Progo will be active as 8I69K from Wates, Jogjakarta, Java Island (OC-021). Activity is to celebrate the 69th anniversary of Kulon Progo. Operations will be on various HF and VHF bands. Length of activity is not known.
QSL via 8I69K direct.

9G - Matteo, IZ4YGS has extended his stay in Ghana and now expects to remain QRV as 9G5GS until 22 September. QSL via Club Log's OQRS, LoTW, eQSL, or direct to home call.

9M6, EAST MALAYSIA. Saty, JE1JKL, will once again be active as 9M6NA from Labuan Island (OC-133), East Malaysia, for both CQWW DX SSB Contest (October 24-25th) and CQWW DX CW Contest (November 28-29th) as a Single-Op/All-Band (40-10m)/Low-Power entries. However, both operations will be done remotely thus not eligible for IOTA credit but good for DXCC. QSL via ClubLog's OQRS only for Bureau and direct QSLs. All the logs are promptly uploaded to LoTW.
Visit Saty's home page at: https://jsfc.org/je1jkl/9m6na.html

F - The Charente DX Group will be active as TM7R from Ile de Re (EU-032) from 26 September to 3 October. Six operators (namely F4GBD, F5LOW, F5MNK, F5NBQ, F6HKA and ON4ZD) will be QRV on the HF bands CW, SSB and digital modes. QSL via Club Log's OQRS (preferred), or via ON4ZD, direct or bureau.

F - Special callsign TM82ALC will commemorate the 290th anniversary of the death of the French explorer and adventurer Antoine Laumet de la Mothe, sieur de Cadillac (1658-1730). The car brand Cadillac was named after him, who had founded Detroit in 1701. Look for SSB, CW and digital modes activity on 9-13, 16-20 and 23-27 October. QSL via eQSL, LoTW, or via F4ELR. More information can be found on https://tm82alc.blogspot.com/p/accueil.html.

G - David, M0VDL will be active from Lundy Island (EU-120) between 26 September and
1 October. He plans to operate SSB and FT8 on 20, 40 and maybe 80 metres, primarily in the local morning and evening hours.

HC - Members of the Ecuador DX Club will be active on all bands and modes as HD0DX on 26 September. Those who participate in this special event will be awarded the commemorative diploma "Ecuador Volcanoes" (see https://ecuadordxclub.org/volcanes). QSL via LoTW,
or via NE8Z.

LX, LUXEMBOURG. Operators Gerard/PA0PIW, Gert/PA2LO, Maarten/PA3EYC, Tymen/PA3GRM, Bert/PD0GP and Hans/PE1KWH will be active as LX/homecall from Wilwerdange, Luxembourg, between October 15-18th. Activity will be on 160-10 meeters using CW, SSB, FT8, FT4 and RTTY. QSL via PA3EYC, ClubLog or LoTW. PLEASE NOTE: PD0GP will be using the LX6/ prefix for the Luxembourg novice class. If they have permission, they will try to operate from a Conzefenn site (LXFF-0039) for the "World Flora and Fauna" program, and sign as LX/homecall/p.

OE - Hannes, OE1SGU will be active as OE1990SGU on 1-31 October to celebrate his 30th anniversary in amateur radio. QSL via LoTW, eQSL, or via OE1SGU (direct or bureau).

OH0 - Previously active from the islands of Hailuoto (EU-184, 31 August-2 September), Raippaluoto (EU-101, 3-4 September), Reposaari (EU-173, 6-10 September) and Kustavi (EU-096, 10-13 September), Gaby, OH/DF9TM and Frank, OH/DL2SWW have been QRV from Orslandet (EU-097)
since 14 September, and plan to remain there until 19 September. Then they will be moving to the Aland Islands (EU-002), and be active as OH0/DF9TM and OH0/DL2SWW on 23-26 September before heading back home. All QSOs will be uploaded to Club Log and confirmed automatically via the bureau. Direct cards via home calls "will be answered until November".

ON - The ONZ Oostkust Radioclub (ON6HC) will be active on all bands and modes as OR39CLM between 14 October and 13 November. This will be their 39th special operation for the Canadian Liberation March, the annual event that celebrates the liberation of the Belgian town of
Knokke on 1 November 1944. QSL via ON6HC (bureau only). A certificate will be available, see https://www.onz.be/or39clm/.

P4, ARUBA. Robert, W5AJ, will once again be active as P40P from Aruba (SA-036) between September 22-30th. Look for him to be in the CQWW DX RTTY Contest (September 26-27th) as a Single-Op/All-Band entry. QSL via LoTW (preferred) or direct to W5AJ. NO BUREAU. Activity outside of the contest Robert will help the Aruba Amateur Radio Club (AARC) pass out P42WW QSOs on RTTY and CW. The P42WW activity is to commemorate the 75th anniversary of the end of World War II. QSL via P41G.

SM - Travel restrictions permitting, Waldi, SP7IDX will be active as SM/SP7IDX from Stora Alo/Boko Island (EU-177) on 10-17 October. He will operate SSB and FT8 on 40-10 metres. QSL via LoTW, or direct to home call.

IOTA News
AS-013. Members of the Maldives Amateur Radio Society (MARS) are planning to be active as 8Q7RS from Dharavandhoo Island. Dates were not provided (stay tuned!). Activity will be on various HF bands. QSL via 8Q7RS.

AS-152. (RI0Q Bol'shoy Begichev Island Update). From QRZ.com, date September 20th: Gentlemen, all our Arctic expeditions are very expensive. All the time, before each expedition, we always come up with something new and special to make your support of us more interesting and attractive. In this expedition we want to introduce a special QSL called "fast".
All "fast" QSLs will be sent out from the very first functioning post office on our way back. Most likely it will be in Khatanga settlement (UA0A). "Fast" QSL is a special designed postcard with a real 1987 year photograph of Preobrazheniya polar meteorological station (18 km from Bolshoy Begichev Island) stamped by two stamps. The first one is the original 1987 year stamp found at Preobrazheniya station (closed in 1990 and abandoned). The second is a modern copy of this stamp made for our 2021 expedition. The cost of a QSL is 30 USDs. It can be paid via PayPal. Links are at (www.qrz.com/db/ri0q) Those who wish to receive this exclusive card must order it prior to the expedition start. All others will receive traditional confirmation (OQRS, LoTW, ClubLog). IOTA credit via Clublog will be opened in 6 months after the end of the expedition.

EDITOR'S NOTES: Members of the Arctic Legends team (RT9K) are planning to activate the Island of Big Begichev (Bol?shoy Begichev) sometime in early 2021. The team recently received the callsign RI0Q for the DXpedition. The team is looking for funds (15,000 USDs was mentioned) to conduct this operation. To achieve their goal to operate from Bolshoj Begichev Island, the team will have to travel 3624 km (by snowmobiles 1812 km*2). Watch for updates on Twitter by Igor, UA9KDF.
(https://twitter.com/ua9kdf)

EU-032. Members of the Charente DX Group (CDXG) will be active as TM7Rfrom Ré Island (DIFM
AT-022) between September 26th and October 3rd. Operators mentioned are Franck/F4GBD, Eric/F5LOW, Laurent/F5MNK, Fabrice/F5NBQ, Bertrand/F6HKA and Léon/ON4ZD/OS0S.
Activity will be on various HF bands using CW, SSB and the Digital modes. QSL via ON4ZD, direct, by Bureau or ClubLog. Please use Clublog's OQRS as much as possible.

VP8PJ: FINAL PRESS RELEASE ---> "We have closed the books on the VP8PJ DX-pedition to the South Orkney Islands (AN-008)", the Leadership Team announced on 13 September. "Due to the global pandemic our equipment was returned to California about two months later than planned. Nothing was missing or damaged during the extended journey. Thanks to the worldwide
clubs/foundations, the DX community and our corporate sponsors, the project met all operational and financial goals. We appreciate the continued support from the DX community.
Consistent with our commitment to upload the complete VP8PJ log to LoTW six months following the DXpedition, Tim M0URX will upload the complete log on 15 September.
Planning for our next project [ZL9 New Zealand Sub Antarctic Islands, is underway. Exact timing will depend on lifting of the global travel restrictions, issuance of the landing permit and ship scheduling, early 2022 is the plan".
--------------------------------------------------------------------------------------------------------------------------------------
1K0MM PACIFIC MARINE HISTORICAL AND GEOGRAPHIC POSTAL FILM - RADIO DX-PEDITION (September 18th-October 16th) -- FROM THE KINGDOM OF NORTH BARCHANT (Press Release, dated September 16th).
The Ministry of Post and Communications of the Kingdom of North Barchant
(https://barchant.org/news/radio-licenzia) under No. 1 issued a 1K0MM radio amateur license for collective use to the International Marine Club «Seafarer» to work on the air from a seagoing vessel in the waters of open, neutral and territorial waters of the oceans. The 1K prefix stands for
«The First Kingdom on the Open Ocean».
Analytical article on virtual states (https://barchant.org/articles/1k0mm)
From 18 to 20 September, the first activity of the unusual Pacific Marine Historical and Geographic Postal Film-Radio DXpedition of the virtual state of the Kingdom of the North Barkhant - 1K0MM will take place, which will be active from the yacht in the open waters of the Sea of ??Japan on various
HF bands SSB & CW. Unique BOTTLE MAIL QSL and 3D WOOD QSL & POST CARD will be issued, special 6-page paper card, envelope, art stamp, 3D wood stamp and stamps will be printed.
The most active on 6 continents will become holders of the citizenship and passport of the Kingdom of North Barchant, and will also receive banknotes and silver coins as a gift.
Also, as a gift of 2 different banknotes of the Kingdom of Northern Barchant, the most active radio amateurs from all over the world will be awarded, who will conduct a larger number of QSOs with different types of modulation on different bands.
BOTTLE MAIL QSL will only be issued upon request via RM0M
(https://www.qrz.com/db/rm0m) to E-mail: This email address is being protected from spambots. You need JavaScript enabled to view it.