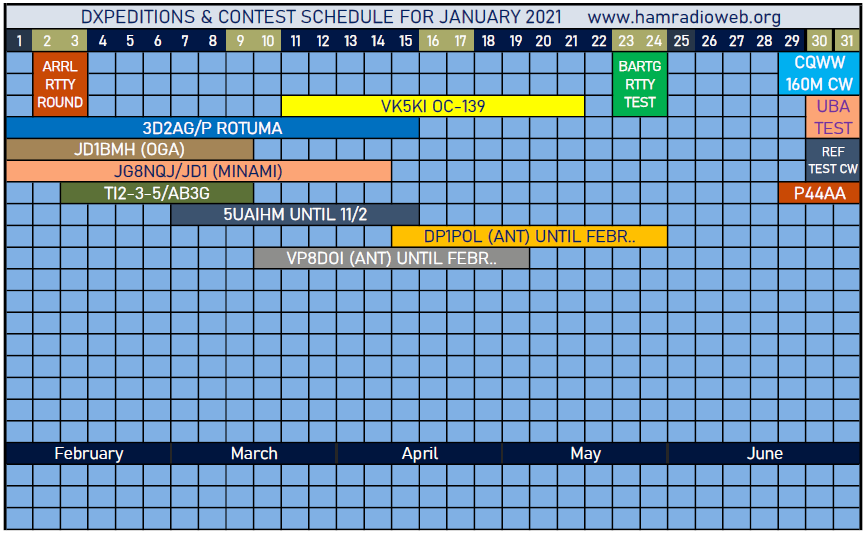 3A, MONACO. Blaise, 3A2OC, is a new active ham from Monaco City. He states on QRZ.com, "I operate with long wire and vertical antenna, with Yaesu FTDX-3000." No QSNs have been reported on the DXCluster yet. QSL via his address on QRZ.com.

3V, TUNISIA. Operator SWL Ashraf "Ash", 3V4-002 (KF5EYY), will be active as 3V8SF from the Scout Radio Club of Sfax city club station during the CQWW 160M CW Contest (January 29-31st) as a Single-Op/Low-Power entry. QSL via LX1NO or LoTW.
Read about Ashraf on the following Web page at: http://www.kf5eyy.info

6O7O DXPEDITION TO SOMALIA (Video Available). During the January 2021 Central Arizona DX Association (CADXA) meeting, there was a presentation on "6O7O DXpedition to Somalia" by Ken Opskar, LA7GIA. Ken was in Somalia in September 2019 for a trip planned, in part, to be a fund-raiser for Sabona, a Norwegian organization that funds education and meals for children in Africa. This 52 minute program is now available online on
YouTube.com at: https://www.youtube.com/watch?v=AE5zhvcb3EE

9A - 9A64AA is the special callsign that Tom, 9A2AA is using until the the end of the year to mark his 64th year in amateur radio. QSL via home call.

AX, AUSTRALIA (Special Prefix). Look for Australian radio amateurs to use the special prefix "AX" on their holiday -- Australia Day, January 26th. The day commemorates the arrival of the first fleet in 1788, the raising of the British flag, and the establishment of European settlements. The annual day celebrates Australian history and culture.

CE0Y - CD0YJA is the recently issued callsign for Camilo Johnson Amorrortu to be QRV from Hanga Roa, Easter Island (SA-001) when time permits. An airline pilot, he can also be found as either CD0YJA/3 from Santiago or CD0YJA/4 from the city of Machali. QSL via CE3AA.

G - Special callsign GB75ISWL will be active "on most bands and modes" throughout 2021 to celebrate the 75th anniversary of the International Short Wave League (https://www.iswl.org.uk/). QSL via the bureau and eQSL.

GB80, ENGLAND (Special Event). Look for special event station GB80ATC to be on the air during 2021-2022 for the celebration of 80th anniversary of the formation of the Air Training Corps (ATC), now known as the Royal Air Force Air Cadets (RAFAC). QSL via address on QRZ.com.

GU, GUERNSEY (Correction). Look for GU4YOX (not GU4YDX) from Guernsey to be active during the CQ 160m CW Contest (January 29-31st) as a Single-Op/High-Power entry. QSL via LoTW or GU4YOX direct.

HI - HI1IDT is the callsign that HI5KKK, HI8AM, HI8AT and HI8RDD have been using since 21 January from Isla Alto Velo. They expect to remain there until 24 January and operate SSB, FM and digital modes on the HF and VHF bands. The southernmost point of the Dominican Republic, Alto Velo is located about 12 kilometres away of Isla Beata (NA-122).

JA_ant - Takumi, JG3PLH is a member of the 62nd Japanese Antarctic Research Expedition team and will be stationed at Syowa base on East Ongul Island (AN-015), Antarctica until January 2022. He will be active as 8J1RL starting in February. QSL via the bureau.

OC200, PERU (Special Event). Members of the Radio Club Peruano (OA4O) will activate four different special event callsigns (with a single suffix spelling the word PERU) throughout the 2021 year to celebrate the 200th anniversary of Peruvian Independence.
QSL all callsign via OA4O. The special callsigns and months are as follows:
OC200P -- January/May/September OC200R -- March/July/November
OC200E -- February/June/October OC200U -- April/August/December
Contacts with the four stations, regardless of the order, will award
individual the Bicentennial Diploma of Independence in the following ways:
a) Bronze: Form the word PERU only once
b) Silver: Form the word PERU twice
c) Gold: Form the word PERU three times

R900, EUROPEAN RUSSIA (Special Event). Radio amateurs from St. Petersburg and the Leningrad Region will activate the following special event/memorial stations R900DM (QSL via RC1C), R900DV and R900BL (QSL via UF1M) between January 25-31st or until February 3rd. Activity is to commemorate/dedicate the 77th anniversary of full removal of enemy blockade of Leningrad and
76th anniversary Victories of the Soviet people in the Second World War. Operations will be on various HF bands, and is good towards a FREE "Blockade" diploma (see, http://www.alrs.info/articles.php?article_id=10
or https://www.qrz.ru/news/16444.html).

SM - SD400SU is a special callsign for the Sundsvalls Radioamatorer (SK3BG) to celebrate during 2021 the 400th anniversary of the city of Sundsvall. QSL via Club Log's OQRS, or via SM3NXS (direct or bureau).

SN0, POLAND (Special Event). Wojciech, SP2FVN, will activate the special event callsign SN0MORSE to celebrate the 230th anniversary of the birth of Samuel Finley Bresse Morse (April 2, 1872), an American painter and inventor who developed and electric telegraph. In 1838 he and his friend
Alfred Vail developed the Morse Code. QSL via SP2FVN.

SV/A, MT. ATHOS (Video - Pilgrimage to Mt. Athos). From YouTube.com, the Bay Area DX Club Zoom meeting presentation: "Rick, NE8Z/HC1MD, generously presents the details of his 2011 trip to Mt. Athos and visit with friend and fellow ham, Fr. Apollo SV2ASP. Only pilgrims are allowed to visit
(no tourists) and are ordinarily prohibited from taking pictures, but Rick received special permission to do so during his 9-day stay. Rick's photos and memories of Fr. Apollo, Mt. Athos, and the culture of this special place reveal a world that few will ever see. Thank you, Rick!"
To see the 1:42 hour video, go to: https://www.youtube.com/watch?v=0qbk0YyYFmE

VK5KI KANGAROO ISLAND (OC-139) QSL STATUS/UPDATE. Grant, VK5GR, who was recently active from Kangaroo Island (OC-139) as VK5KI, posted the following on January 21st[edited]: VK5KI now QRT: QSL Card Requests Open -- Thanks everyone for all of the QSOs over the past 10 days. It has been a lot of fun. Hopefully I have been able to give out OC-139 IOTA to a few more people for an All Time New Island (ATNI). Those seeking QSL cards for IOTA credits will be happy to learn that the log has already been delivered to my QSL Card Manager Charles, M0OXO. Cards have already been printed and are available NOW for immediate request. While I recognize time is short to make this year's IOTA Hall of Fame list you might just make it if the postal service is still working between yourselves and the UK. Thanks again until next time!

VR2, HONG KONG (Special Event). Hong Kong's 1555th Kowloon Group (VR2CS) will activate the special event memorial station VR2BLEE to honor one of the most popular icons in modern history, the legendary martial arts master Bruce Lee (The Dragon) who still inspires people worldwide more
then 47 years after his passing. The chief operator of VR2BLEE will be Igor, VR2ZQZ. Length of activity and operations were not mentioned. QSL via address on QRZ.com direct.
For more details on Bruce Lee, see: https://brucelee.com

ZL - Celebrating the club's centenary, the Radio Society of Christchurch (ZL3AC) will be active as ZL100RSC throughout February. The first club meeting took place on 15 February 1921. QSL via operator's instructions.

ZS, SOUTH AFRICA. Member of the Rebel DX Group, Dom, 3Z9DX, has been heard the last few days from Cape Town as ZS/3Z9DX. Activity has be on 80/20/17 meters. QSL via ClubLog's OQRS.

Iota News
NA-122. If you worked HI1IDT, activity was from Isla Alto Velo and will be on the air until January 24th. Activity was expected to be on various HF/VHF bands using SSB, FM and the Digital modes.
QSL via address on QRZ.com.

John Richard "Rick" Burke, VO1SA (VO2CW and VE1NG) passed away on 20 January aged 77, after a short battle with amyotrophic lateral sclerosis. An avid DXer with a personal interest in collecting QSL cards, last year he retired from his position as the VO Incoming QSL Bureau Manager after 24 years of "extraordinary service to amateur radio in Newfoundland and Labrador" (RAC).

CQ WW 160-METER CW CONTEST ---> Object of the contest is for amateurs around the world to contact other amateurs in as many USA States (CONUS plus District of Columbia), Canadian provinces, and countries as possible utilizing the 160m band (see https://www.cq160.com/ for complete rules).
This year's event will run on 29-31 January, from 22:00 UTC to 22:00 UTC. Do not forget to give a look at the Announced Operations listing maintained by Bill, NG3K at https://www.ng3k.com/Misc/cq160c2021.html.

3D2AG/P ---> The complete FT8 log and a partial CW log (until 28 December 2020 at 11:47 UTC) for the recent operation from Rotuma have been uploaded to Club Log, and the OQRS has been enabled. "The remainder of the CW logs until 13 January will be uploaded soon", Tony, 3D2AG reported on 20 January.

4X0RMN: POSTPONED ---> Udi, 4X6ZM reports that the 4X0RMN operation from Makhtesh Ramon is not going to happen on 30 January-1 February. The new firm dates will be announced as soon as circumstances permit.

P44AA: CANCELLED ---> Mathias, DL4MM has had to cancel his 23 January-3 February operation from Aruba, as flag carrier KLM has suspended all of its long-haul flights after the Dutch government announced new travel restrictions.

HAMCATION QSO PARTY. The HamCation QSO Party has been organized to create a fun way for amateurs to celebrate the Orlando HamCation experience over the air. The QSO party will replicate the camaraderie and social experience of attending HamCation and provide a way to have fun on the radio since HamCation 2021 will not be held due to Covid-19. The HamCation QSO Party will be a
12-hour QSO Party on the HamCation weekend of February 13th, 2021, from 10:00 am EST Saturday, to 10:00 pm EST Saturday. It will be a CW and SSB on-the-air operating event on 80, 40, 20, 15, and 10 Meters, during which anyone can work anyone! There are different power categories and all participants will be single operators as there is no multi-operator category. There will be special event stations to heighten the fun and challenge of participating in the QSO party. Nine Special Event
1x1 stations will be active that will spell out ?HAMCATION?, such as K4*H*, W4*A*, K4*M*, etc. Sponsored Icom Plaques will be issued, and all participants will be able to download an ICOM-sponsored certificates.
For more details, see the following Web pages:
https://www.hamcation.com/special-event-station
http://www.arrl.org/news/orlando-hamcation-online-event-and-qso-party-set
http://www.arrl.org/arrlletter?issue=2021-01-21#toc01