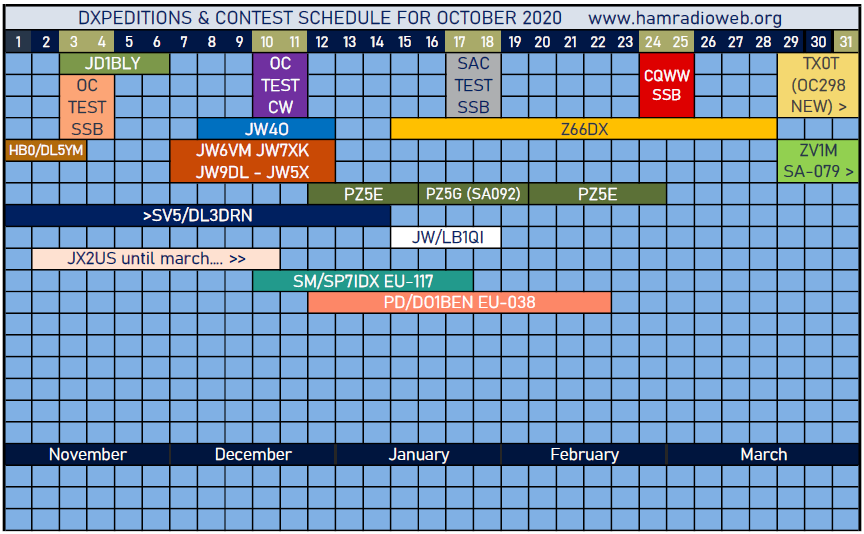 4A, MEXICO. Members of the Astronomical Society of Quintana Roo, A.C. (SAQRO) will be using the callsign 4A1A. QSL via address on QRZ.com.
No other details were provided.

4U_UN - The United Nations Amateur Radio Club will be active as 4U75UN to celebrate the 75th anniversary of the United Nations. "Currently there is no set operations schedule", The Daily DX reports, but the QSL manager (HB9BOU) "already has QSL cards ready". Located at the 42nd floor of the UN Headquarters in New York City, the station has its control point on the ground floor and can be operated remotely offsite.

9M4DXX (MARTS PENANG EVENT STATION) Yoshida, JE1SCJ, is currently active as 9M4DXX from Pinang State IOTA group (AS-015) on Penang Island, West Malaysia, until the end of December 2020. If you need him on the low bands (160/80m), please work before he leaves. He will operate FT8 on
weekends until the end of the year. QSL via the Bureau.

CE - Members of the Grupo de DX Pacifico Chileno (https://www.cpdxg.cl/) will be active as XR500M on 1-31 October to commemorate the 500th anniversary of the discovery of the Strait of Magellan during the first global circumnavigation voyage. QSL via Club Log's OQRS, LoTW, eQSL, or via XQ7UP.

EA - URE San Fernando (EA7URF) is participating in the official celebrations for the 500th anniversary of the first circumnavigation of the Earth. The fourth in a series of AM500 special
event stations representing a milestone of the voyage will be AM500ETS, to be active from 31 October to 8 November to memorialize Ferdinand Magellan's discovery of the Estrecho de Todos los Santos, later named after Magellan himself. QSL via EA7URF (bureau or direct), LoTW and eQSL. Previously active were AM500SEV (August 2019), AM500SAN (September 2019) and AM500ISJ (June 2020).
EA8, CANARY ISLANDS. Juan, EA8RM, will be active from Gran Canaria Island (AF-004) during both the CQWW DX SSB Contest (October 24-25th) and CQWW DX
CW Contest (November 28-29th) as a Single-Op/All-Band entry. QSL via LoTW.

F - Guillaume, F1IEH will be active as TM72WOW at various times between 3 October and 22 November. He will operate SSB, RTTY, FT8/FT4. QSL via home call. The special callsign memorializes the flights of Wilbur and Orville Wright at Camp d'Auvours near Le Mans in late 1908.

F - Commemorating the 75th anniversary of the creation of the United Nations, Franck, F4FHM and Dany, F0GFI will be active as TM75ONU on 17-31 October. They will operate SSB and FT8 on the HF bands and 2 metres. QSL via eQSL only.

F - Members of the Radio Club de Cestas (F6KUQ) will be active as TM30CDR on 14-22 November. They will operate CW, SSB and FT8/FT4 on 80-6 metres. QSL via F6KUQ. The special callsign marks World Children's Day, celebrated annually on 20 November.

HC - Promoting the biodiversity of Ecuador, the HC DX Group will be active as HD1X from the Choco ecoregion (WWL FI09iv) from 31 October to 3 November. Look for activity on the HF bands SSB, SSTV, FT4 and FT8. QSL direct to EC5R.

I - The stations affiliated to the "Coordinamento Stazioni Marconiane Italiane", which gathers amateur radio stations operating from historic Marconi sites located in Italy, will be active on 3 October to celebrate the 125th anniversary of the invention of radio. Weather and Covid-19 restrictions permitting, twelve stations are expected to be QRV: IY0CG, IY0GA (Sardinia), IY0IMD, IY0ORP, IY0TC, IY1MR, IY1SM, IY1SP, IY4FGM, IY5PIS, IY6GM and IY7M.
A certificate will be available for working at least six stations; just send your QSO details to Pier Luigi Anzini, IK2UVR, ARI HF Award Manager (ik2uvr[@http://www.cqdx.ru/4u1a/) to celebrate the 75th anniversary of the United Nations until 31 December. QSL via UA3DX.

PD75, THE NETHERLANDS (Special Event). Look for special event station PD75LG to be active from Drenthe between October 20-22nd. Activity is to celebrate the 75th anniversary (on October 21st) of The Netherlands IARU society VERON (Vereniging voor Experimenteel). QSL via the Bureau and LoTW.

PJ2 - Curacao is one of the four new DXCC Entities born out of the dissolution of the Netherlands Antilles on 10 October 2010. To commemorate the 10th anniversary of "10/10/10", PJ2AFM, PJ2CF and PJ2SM will be active as PJ2C on 10 October. Main activity will be on 20 metres SSB. QSL direct to EC5AHA.

PZ, SURINAME (Postponed Again). Markus, DJ4EL, who was expected to be active as PZ5GE from Suriname between October 12-24th, has postponed his operation again until Easter of 2021. He states, "Due to the rising Covid-19 cases in Europe tourists who would like to visit Suriname must
bring a negative Covid-19 test and are required to be quarantined for 10 days after arrival which makes a trip to Papegaaien island impossible for me. The second problem is that on the way back to Germany I would have to travel via Amsterdam airport which could make another Covid-19 test and another quarantine at home necessary." His activity from Pagegaaien Island (SA-092) as PZ5G has also been change and hopes to be active between April 2-5th, 2021. Activity will be on 80-10 meters using CW and SSB. QSL via LoTW or his home callsign. Look for updates on Twitter:
https://twitter.com/rapanuiman

SM - Palle, SA0BYP and Johan, SA3BYC will be active from SI9AM (the King Chulalongkorn Memorial Amateur Radio Society's station) in Ragunda, Sweden on 10-11 October for the SSB leg of the Scandianavian Activity Contest. QSL via SM3FJF, direct or bureau.

SP - Special callsigns 3Z40RY, HF40RY, SN40RY, SO40RY, SP40RY and SQ40RY will be active from 1 October to 31 December for the 40th anniversary of the first RTTY QSO from Poland, made between SR1PBW and Y23NE (currently DM2CNE) on 19 December 1980. QSL via operators'
instructions. A certificate will be available; details can be found on https://www.qrz.com/db/SP40RY.

SU, EGYPT (Special Event). Members of the Egyptian Radio Amateurs Society For Development (ERASD) will be active as EU8J from Wadi Degla, Egypt, between October 16-18th. Activity is to support all ages to learn about Radio Amateur and communications technology, and how together we can solve the most pressing challenges facing our planet. QSL via SU1SK, eQSL
or LoTW. Visit the ERASD FaceBook page at: https://www.facebook.com/erasdnet

TA - Members of the Tango Alpha Ham Radio Club (YM1KE) will operate special event station TC6EKM on 3-7 October in commemoration of Liberation Day (6 October 1923, which marked the end of the Allied occupation and military administration of Constantinople/Istanbul after World War I). QSL via eQSL.
TG9, GUATEMALA (Postponed Again). Dwight, VE7BV, who was expected to be active as TG9BBV from Antigua, Sacatepéquez, Guatemala, between November 1-30th, has postponed again due the requirements to quarantine. He is looking at possibly going in May to mid-June, 2021.

TM30, FRANCE (Special Event). Members of the Ondes et Micro-informatique Radio Club (F6KUQ) will be using the special callsign TM30CDR from Cestas between November 14-23rd. Activity is to celebrate the "International Day of the Rights of the Child" (November 20).
Operations will be on 80-6 meters using CW, SSB and FT8/FT4. QSL via F6KUQ
(paper QSL via Bureau or eQSL).

VQ9 - VQ9T is the callsign that Bob, DU7ET (WT3A) will be using while operating from Diego Garcia (AF-006), Chagos Islands. This is a reissued callsign, previously used by N1TO in 2001 and
2002. Bob will be working as radio officer on a ship for 4-5 months and hopes to have opportunities to go ashore and be QRV.

Iota News
OC-298. (New IOTA) Last week we mentioned that Cezar, VE3LYC, will be active as TX0T from Tatakoto Atoll, French Polynesia, between October 29th and November 5th. He posted the following on his TX0T Web page: September 26th -- "ANFR, the authority of French Polynesia, issued me the temporary operating radio amateur license, the documentation required for temporary importation of radio equipment, as well as the special callsign I requested. I have purchased the return plane tickets for Ottawa - Papeete, and Papeete - Tatakoto."
September 30th -- "All donors will automatically by mailed QSL cards directly if they made the log. Additionally, they will benefit from their contacts being uploaded and available for QSO matching 30 days after the expedition. I will be working with Alfio (IT9EJW), who will do the QSL design and printing, to ensure that direct QSL requests will be mailed by early January 2021. Meanwhile, the respective contacts will also be uploaded and available for QSO matching
within 60 days of the operation."
For more details and updates, see: https://tx0t.weebly.com
Qsl Info
NEW QSL MANAGER. Vasiliy, RW6HS, informs OPDX that he is now the QSL Manager for the following stations: CN17JQ, RW9JZ and UI8J

JX0X 2021 ---> The final decision to go to Jan Mayen (http://jx0x.com/) will be taken in a couple of weeks' time. "This decision will depend heavily on if we think we have enough support from the individual DXers", the team says. "We depend on upfront support to sign the vessel contract", and donations are needed NOW. "We have been working on this project since April 2019, we have invested much time in planning and preparing this trip with all the permits and negotiations - and we feel we're so close. If you support us you will of course receive a QSL card and express LoTW as part of the donation. In addition we guarantee a 100% refund of all donations if we decide to cancel the trip". JX0X will focus on 160-30 metres CW and digital, with vertical antennas close to saltwater, and an excellent take-off for North America and Japan. They will also have beams for 20-10 metres. PayPal donations can be sent to jx0x[@https://openfalklands.co.uk

* Operators Jef/DD2CW, Francis/ON6LY and Dirk/ON3UN will once again be active as SI9AM from the "King Chulalongkorn Memorial", the largest Thai Pavilion in the world outside Thailand in Raganda, Sweden, between October 20-28th. This will be their final time it the SI9AM station because it is closing down on December 1st. Activity will include the CQWW DX SSB Contest (October 24-25th) as Multi-Op entry. QSL this operation via ON3UN.

WSJT-X 2.3.0-rc1 ---> Candidate releases are intended for beta testers: individuals interested in testing the programme's new features and providing feedback to the WSJT Development Team. The first candidate release for WSJT-X 2.3.0 introduces FST4 and FST4W, two new modes designed for use on the LF and MF bands. FST4 is optimized for two-way QSOs, while FST4W is for quasi-beacon transmissions of WSPR-style messages. Further details and
operating hints can be found in the "Quick-Start Guide to FST4 and FST4W":
https://physics.princeton.edu/pulsar/k1jt/FST4_Quick_Start.pdf. Links to installation packages for Windows, Linux, and Macintosh are available on
http://physics.princeton.edu/pulsar/k1jt/wsjtx.html.

SILENT KEY.
OPDX was informed by QSL Manager Bill, W9VA, that Andre, PY0FF, became a Silent Key (SK) on Friday, September 25th. He was 70 years old and suffered from duodenum cancer. Andre was the lone resident DX'er from Fernando de Noronha for many years, beginning 1987. He moved to the mainland in 2013 and has recently been active from Aracaju as PP6ZZ. He returned to the island this past February and was hoping for another visit before the end of the year. He was part of the PW0S DXpedition to St. Peter and Paul Rocks in 2001 and leader of the PW0T DXpedition to Trindade 2002.
Bill, W9VA, will continue as PY0FF QSL Manager and can confirm all contacts with that callsign. OPDX and its readers would like to send out our deepest sympathy to the family and friends of PY0FF.