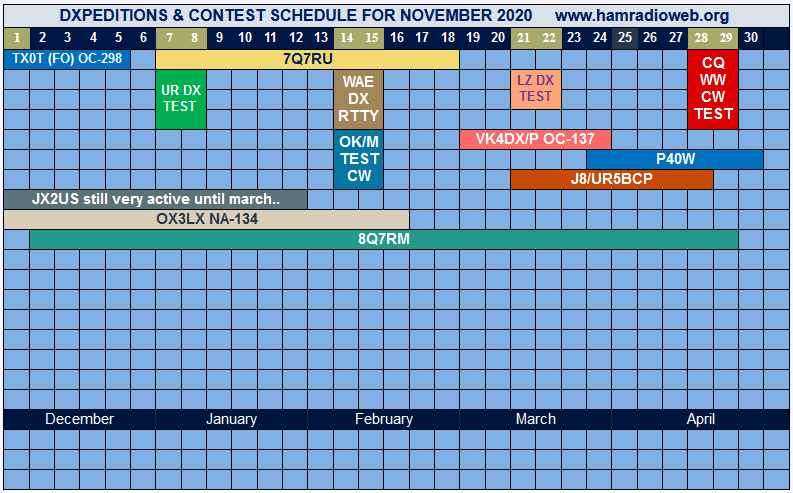 4X - The "Land of Craters" programme will see four special stations operate from the Makhteshim ("craters") in the Negev desert of Israel. The first activity will take place on 13-14 November from the Makhteshim Arif (Arif Craters) under the special callsign 4X0ARF. It will be followed (dates to be announced) by 4X0GDL (Makhtesh Gadol, the Large Crater), 4X0KTN (Makhtesh Katan, the Small Crater) and 4X0RMN (Makhtesh Ramon). A certificate will be
available for working three out of four special stations: see https://www.iarc.org/craters/.
QSL for all callsigns via 4X6ZM, LoTW and eQSL.

7Q - 7Q7RU was expected to be QRV on 7-18 November. The DXpedition team however was unable to catch their flight from Kenya to Malawi owing to some visa problems which are trying to sort out at the Malawian High Commission in Nairobi. In the meantime, they might try and get a temporary 5Z4 operating permit.

FS, ST. MARTIN. David, F8AAN, who was expected be active as FS/F8AAN from St. Martin Island (NA-105) between November 18th and December 4th, has canceled his operation due to Covid-19.

GJ, JERSEY. Bob, GU4YOX, will once again be active as GJ4YOX during the CQWW DX CW Contest (November 28-29th) as a Single-Op/Single-Band (40m)/High-Power/Unassisted entry. QSLs will be available by Bureau, direct and LoTW.

HP - HP3BSM and several other operators will be active as 3E1FP on 1-30 November, while the country celebrates the Festas Patrias that started with the 177th anniversary of the establishment of the Republic of Panama (3 November 1903). Look for activity on 80-10 metres SSB, CW, FT8 and FT4. QSL direct to HP3BSM.

ON - Members of UBA Section KTK (ON6CK) will be active as OP0PEACE until 30 November to commemorate the end of World War I. QSL via operator's instructions and logsearch on Club Log.

OX - Bo, OZ1DJJ has been active again as OX3LX from Asiaat Island (NA-134) since 29 October, and expects to remain there until 16 November. He is QRV in his spare time, typically "around lunchtime and after dinner" (local time is UTC-2), also at night and in the morning hours during the weekends. QSL via Club Log's OQRS, LoTW, or via OZ0J.

PY - Sandro, PY1SAN and Marc, PY1CMT will be active as ZX6BA from Prado (HH02), Bahia on 13-15 November, and as PR1S from Nova Almeida (GG99), Espirito Santo on 16-18 November. They will operate CW and SSB on the QO-100 geostationary satellite, with some FT8 and CW activity on the HF bands running 5 watts. QSL via LoTW only for both callsigns.

SF400, SWEDEN (Special Event). Members of the Borås Radioamatörer (SK6LK) will be active as SF400B between January 1st and December 31st, 2021.
Activity is to celebrate the 400th anniversary of Borås City. QSL via SK6LK, direct, by the Bureau or LoTW. For more details, see:
https://www.qrz.com/db/SF400B
https://www.sf400b.se

TI200, COSTA RICA (Special Event/Early Announcement). Special event station TI200I (Organized by RadioaficionCR.net), will be active between 0000z, September 15th and 0000z, October 29th, 2021. Activity is to celebrate the 200th anniversary (bicentennial) of the independence of Costa Rica which
once was one of the provinces of the "Captaincy General of Guatemala." Operations will be on 80-2 meters using CW, SSB, FM and FT8. Operators will be announced on their Web page at: https://www.radioaficioncr.net
QSL via LoTW and a QSL Manager to be named. For more details, see QRZ.com or the above Web page.

TM50, FRANCE (Special Event). Michel, F8GGZ, will activate special event station TM50GDG between November 9-22nd, Activity is to commemorate the 130th birthday and the death of Charles de Gaulle 50 years ago. Operations will be on 160-20 meters using CW and SSB. QSLs will be sent out
auto magically via the Bureau.

TZ - Ulmar, DK1CE is expected to be back to Bamako, Mali in mid-November and be active as TZ1CE from the QTH of Jeff, TZ4AM for a month. He plans to be QRV "close to full time" on 160-10 metres CW, FT8 and SSB. QSL via DK1CE (direct or bureau); he does not use LoTW.

W0, UNITED STATES (Special Event). You have one more day to work special event stations W0F and W0JH (November 6-8th). For the 16th consecutive year, the Stillwater (Minnesota) Amateur Radio Association (SARA) radio club will be conducting a special event to remember the Edmund Fitzgerald.
The Edmund Fitzgerald, an iron ore carrier, sank in Lake Superior during a severe storm on November 10, 1975, with the loss of all 29 crew on board.
The W0F callsign will ONLY be used for the CW and other Digital modes.
The W0JH will ONLY be operating SSB. Suggested frequencies are (1500-2400 UTC):
W0F for CW: 3560, 7050, 14050, 21060 (may also try 10120 & 18060 depending on propagation conditions)
W0F for FT8 and PSK31: 80, 40, 20, and 15 meters on usual digital frequencies.
W0JH for SSB only: 3860, 7260, 14260, and 21360 kHz
PLEASE... No QSL Cards or other postal requests! Work either or both callsigns and send confirmation request to: This email address is being protected from spambots. You need JavaScript enabled to view it.
All confirmed contacts will receive a QSL certificate via E-mail. See QRZ.com (under W0F or W0JH) for more details on what to send.

YB, INDONESIA. Yohanes, YB2DX, will be active during the CQWW DX CW Contest (November 28-29th) as a Single-Op/All-Band entry. QSL via his home callsign direct or LoTW.

Z8 - Sigfrido, IW9FMD is a member of the United Nations Mission in South Sudan, and has been QRV again as Z81S since early November.
Activity is limited to his spare time; length of stay not known. QSL direct to IT9YVO.

ZA, ALBANIA. Sandro, IN3PPH, is now active as ZA/IN3PPH. He states that he will be active from Qerret and Kavajë (counties of Tirana). The length of his stay is not known. Activity has been on 80/40/20 meters using FT8.
QSL via IN3PPH or LoTW.

Iota News
TM39EU: CANCELLED ---> The 4-11 November operation from the Chausey Islands (EU-039) has been cancelled as France has gone back into nationwide lockdown since 30 October to combat a surge in cases of COVID-19.
AF-018. Operator Raffaele, IH9YMC, will be active from Pantelleria Island (IIA TP-001, MIA MI-124, WW Loc. JM56XT), African Italy, during the CQWW DX CW Contest (November 28-29th) Single-Op/
Single-Band (??m) entry. QSL via LoTW or eQSL.

EU-039. Operators Fabien/F4HIK and Joel/F4IKA, who were expected to be active as TM39EU from Chausey Island between November 4-11th, have canceled their operation due to Covin-19.

QSL VP6MW ---> W0VTT is the QSL manager for Meralda Warren, VP6MW (Pitcairn Island) only for QSOs made on 2 November 2019 and after. All QSOs are uploaded to LoTW, he says, but "many are transcribed from paper logs, so times and dates may not match". Direct cards should be sent to Michael G. Cizek, PO Box 616, St Charles MN 55972, USA (US stations please send SASE, DX stations please send SAE + $2.00 USD). Bureau cards will be answered once
or twice per year.

QSL YS1AG ---> Being "still unable to send any kind of mail abroad", Andres Goens (YS1AG) has "finally yielded and asked a good friend to look after my QSLing". Effective 30 October, cards should be sent direct to K3SX: Sidney D. Shusterman, 5008 Red Hill Rd, Keedysville MD 21756, USA (US stations please send SASE, DX stations please send SAE + $2.00 USD). "I am hoping
that eventually these guys here will open the mail services", Andres says.
"When that happens, I will pick up again the chores".

PIRATE ALERT.
A station signing EZ3AA has been active on 40 meters.
This station is a PIRATE, and the real ham listed on QRZ.com is a Silent Key since Oct. 6th, 2016. Do not waste your time to send a QSL via the manager EZ8AQ.

DIA DO RADIOAMADOR BRASILEIRO --- > The Brazilian Radio Amateur Day is celebrated annually by LABRE on 5 November in memory of Roberto Landell de Moura (1861-1928), National Hero of Brazil and a pioneer in developing longdistance audio transmissions. A certificate is issued for contacts made with 20 different Brazilian stations on any band or mode on 4-8 November (from 21
UTC to 21 UTC). Send your QSO details to Claudio Gimenez, PY2KP, LABRE Radiosport Manager (awards[@http://www.lesnouvellesdx.fr/galerieqsl.php.