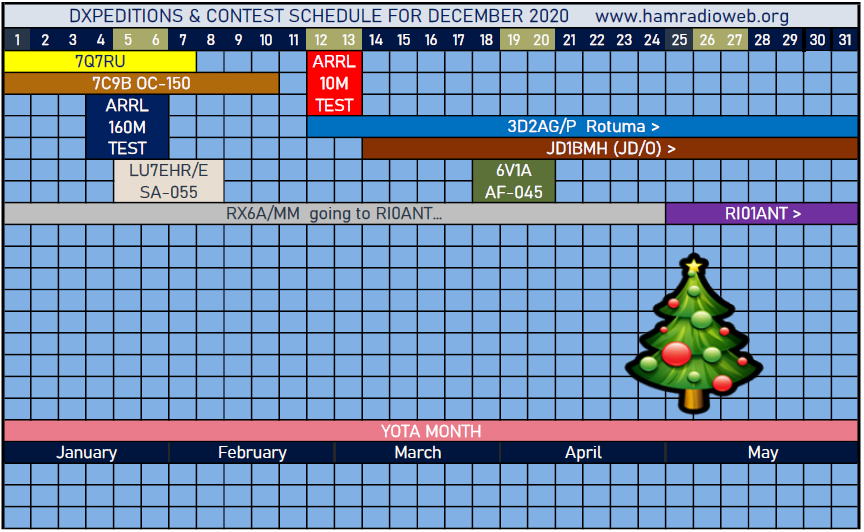 3D2/R, ROTUMA (Reminder). Tony, 3D2AG, is once again active as 3D2AG/p from Rotuma Island (OC-060). Most of his activity has been on 30 meters FT8. He posts on QRZ.com: The "Rehanisi Memorial DXpedition" appears on track, with boat tickets in hand. Departure is scheduled for the 12th of December 2020, and return sometime mid-January 2021. Following a family function to remember our dear late son Rehanisi and put a tombstone on the grave, as time allows radio operations will take place 160m to 6m. Currently in process of securing some equipment, including a generator to take on the boat. QSL via 3D2AG using PayPal, ClubLog's OQRS or direct.
He uses paper logs for CW, and ClubLog for FT8. NO LoTW.

C4, CYPRUS (Special Event). Alex, 5B4ALX, will once again be active as C4XMAS between now and December 31st. Activity is to celebrate the Christmas season. Operations will be on 160-6 meters using CW, SSB and the Digital modes. QSL via IZ4AMS, direct, by the Bureau or ClubLog.
Checkout this year's QSL card: http://www.5b4alx.cloud/c4xmas

CN, MOROCCO. QSL Manager Vasiliy, RW6HS, informs OPDX that he is organizing an expedition in the southern zone of Morocco with a special event ARRAM callsign CN1M between December 24-31st. QSL via RW6HS direct only.

CT9, MADERIRA. Operators Georg/DD8ZX and Klaus/DJ9KM will once again be active as CT9/DD8ZX and CT9/DJ9KM from Madeira Island (AF-014) between February 27th and March 6th (depending on the Covid-19 situation). Activity will be holiday style on 40-10 meters using mostly the Digital modes (FT8 and RTTY). QSL via their home callsigns, by the Bureau, direct or LoTW.

DB100, GERMANY (Special Event). Uwe, DO2PZ, will activate special event station DB100AVUS to celebrate the 100th anniversary of the AVUS (Automobile Traffic and Exercise Road) located in the south-west of Berlin and is the northern section of the A 115 motorway. It opened on September 24th, 1921. The AVUS was the world's first exclusive car road. The 8.3 kilometer long and chargeable route served as a racing and test track and was not for public transport until 1940. Activity will be throughout 2021. QSL via DO2PZ, direct or by the Bureau. QSL cards are expected to be dispatched between January/February 2022.

DL_ant - Felix, DL5XL will be a member of the Antarctic summer season’s team at Neumayer III station. The RV Polarstern will be leaving Bremerhaven, Germany on 20 December, and during the long voyage Felix will operate mainly CW and digital modes as DP0POL/mm (QSL via DL5EBE). From mid-January to mid-March 2021, he expects to be QRV as DP1POL (QSL via DL1ZBO) from Neumayer III. The club call DP0GVN (QSL via DL5EBE) may also be used by other operators: in particular Theresa, DC1TH, who will be part of the 2021-22 overwintering crew and will operate DP0GVN via the QO100 satellite.

HK - Due to Covid-19 restrictions, Lothar, DK8LRF (HK3JCL) is remaining in Colombia until late April 2021. QSL via the bureau to home call.

HS, THAILAND. Chris, GM8NMM, is now active as HS0ZJB from Bang Saray, Bang Sare, Thailand. His length of stay is unknown. Activity will be on various HF bands, but was heard on 20 meters SSB December 20th. QSL via LoTW or eQSL.

OH9, FINLAND (Special Event). Once again Santa Claus Land (OH9SCL) is active until December 31st. OH9SCL has been active every December since 1986, operating in Finnish Lapland at the Arctic Circle. Activity will be mostly on the HF bands using all modes. QSL direct to OH9FKJ, LoTW or eQSL.

PC19, THE NETHERLANDS (Special Event). Hans, PA7HPH, will activate the special event station PC19HOPE from Vaassen between January 15th and March 10th, 2021. Activity is to commemorate (not forget) the economic, social problems, and the many people who have died (lost of their loved
ones or were left in solitude) as of the result of the pandemic.
QSL via PA7HPH, by the Bureau or eQSL.

SP - Celebrating the New Year, members of the Radio Club Enigma (SP2PBM) will be active as HF2021HY between 19 December and 10 January. QSL via Club log's OQRS, LoTW, or via SP2PBM.

UA_ant - Alexei, RX6A will be active as RI01ANT from Progress Station and Vostok Station, Antarctica approximately between 25 December and 30 May 2021. He will operate mainly CW and FT8 on 40 metres "and higher". QSL via RX6A.

Z8 - Diya, YI1DZ expected to be back in Juba, South Sudan on 16 December. Hopefully he will be QRV again in his spare time as Z81D before the end of the year. He will operate SSB and FT8 on 80-6 metres. QSL via Club Log's OQRS, LoTW, eQSL, or via OM3JW.

Iota News
*NA-041. Phil, KC3CIB, will be active as KC3CIB/KL7 from Shelter Island between May 29-31st, 2021. He will be there on a fishing trip, but will be activating Shelter Island for IOTA purposes. Activity will be limited, and QRP with an Icom IC-705 most likely using a Digital mode. QSL via eQSL or direct. Look for more details to be forthcoming.

*OC-150. Members of the West Nusa Tenggara Regional ORARI are now active as 7C9N from Mataram City on Lombok Island (ARLHS IDO-099) until December 31st. Activity will be on various HF bands. QSL 7C9N via HA3JB.

TX0T QSL STATUS. Cezar, VE3LYC, reports on December 17th: All direct QSLs for stations from United States and overseas were mailed late afternoon today from Spring Brook, NY. Direct cards for Canadian stations were mailed yesterday from Kingston, ON.
Any direct requests received after Dec 14 were and will be mailed from Canada.

+ SILENT KEY +
Halim Dani Hidayat, YB2CW passed away on 12 December. Born in 1963, he was first licensed as YD2DVM in 1982, then switched to YC2DVM (1984), YC2TJV (2003), YB2TJV (2007) and finally YB2CW in December 2018. He served as President of ORARI Lokal Kebumen and Chairman of the IARU Region 3 Disaster Communication Committee, and gave his services also to the Scout
movement and the Indonesian Red Cross. Dani was renowned for producing logos for many major DXpeditions (e.g. K1N, Navassa 2015) and IOTA operations, as well as for organizations and individuals (e.g. the M0OXO QSL Manager and OQRS logos).

CARIBBEAN, SOUTH ATLANIC AND INDIAN OCEAN TOUR. Randy, WW6RG, informs OPDX that on Sunday evening, January 3rd, around 2100z, he will be arriving in Antigua (V25), and hopes to be set up by 0000z to operate holiday style as V25RA until 1400z Monday, January 4th.
Then on Tuesday, January 5th, at 2100z, he will operate from Ascension Island (ZD8) as ZD8RA. His planned activity will be between 0800-1000z, and then again between 1700-1900z. His equipment will be a new Icom IC-705(10w)and into a AlexLoop antenna. His planned operations will be on 20 and 17 meters SSB only. Randy states, "I am open to setup special times and frequencies for both locations within or close to the times noted above. All times and dates in UTC." QSL via WW6RG, No EQSL or LoTW. Randy also mentions, "I am 9 months from retirement, and my access to these remote locations will cease, so if anyone needs ZD8 or any other of the locations I will be traveling to, Now Is The Time!"
Randy also informs [edited], "I hope to operate from Diego Garcia (VQ9) later in the month around January 18th. More information is to follow."
--------------------------------------------------------------------------------------------------------------------------------------
ELETTRA: THE MIRACLE SHIP AWARD (From January 1st to December 31st, 2021). The "ELETTRA: THE MIRACLE SHIP" is an international amateur radio award organized by A.R.I. Fidenza (www.arifidenza.it), a Italian Radio Club affiliated to A.R.I., Associazione Radioamatori Italiani (Italian Amateur Radio League) with the sponsorship and the historical consultancy and supervision of "Guglielmo Marconi Foundation" (www.fgm.it) and "Marconi Museum" (www.museomarconi.it).
As is well known, on board the yacht "ELETTRA" Guglielmo Marconi conducted numerous and revolutionary scientific experiments related to wireless communications, in a continuous succession of exciting successes that the public opinion of the time often interpreted as real prodigies.
Just think of when the great scientist, from the radio room of the Elettra, anchored in the port of Genoa, turned on the lights of the Sydney Town Hall, on the other side of the planet, using a radio signal. Or again, blind navigation in the Gulf of Tigullio, carried out by means of a radio beacon; without forgetting the radar experiments and microwave transmissions.
It is no coincidence, therefore, that the poet Gabriele D'Annunzio defined Elettra "White ship that sails in the miracle and animates the silences of the world."
"Elettra: the miracle ship" award therefore intends to commemorate the prodigious events that saw the yacht as the protagonist, in the centenary of the ship's official registration in the Italian Naval Register with the new name of "ELETTRA", which took place in 1921.
The name (the original one was "Rovenska") was expressly chosen by Marconi, who some years later also gave it to one of his daughters, Princess Elettra.
The award period lasts the whole year 2021: every month of the year is dedicated to one specific event concerning "Elettra"ship, and is associated to a different special callsign.
Further details visiting our official website: http://www.arifidenza.it We believe that is mainly interest all Ham Radio operators, so please notify it to your associated OM and /or your webmaster/website.
Best regards and Merry Christmas and Happy New Year to you and QRA.
-- Cristiano Cornini, IW4CLV A.R.I. Fidenza Radio Club President