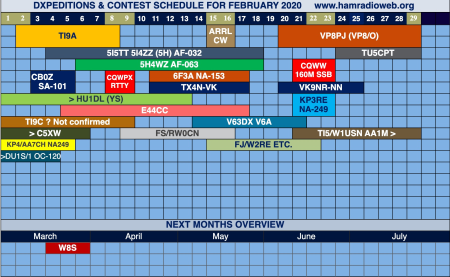 3W - Wolfgang, DL5MAE will be active again in his spare time as 3W2MAE from Vietnam approximately between 13 and 20 February. He has antennas for 80-10 metres, but the QRM at his QTH, especially on the low bands, is very high and "sometimes it needs lots of patience to complete a QSO". QSL via DL5MAE (bureau preferred).

DL - Club station DF0CHE will be active as DA2025C from 1 February to 31 January 2021 to support the candidacy of the city of Chemnitz as European Capital of Culture 2025. All QSOs will be confirmed via the bureau and eQSL.

DL - Heiko, DK3DM and others are active as DL2020R until the end of the year to celebrate the 30th anniversary of the German reunification process. QSL via Club Log's OQRS (bureau or direct), or direct only to M0SDV.

DL - DL250BEETH is another special callsign commemorating Ludwig van Beethoven's 250th anniversary. It will be used by the Kerpen local branch of DARC from 8 February to 31 December. QSL via DJ6SI.

E5 - SOUTH COOK ISLANDS (Reminder). Donald, VE7DS, will be active as E51DDG from the Kiikii Inn on Rarotonga Island (OC-013) between February 2-14th. Activity will be on 40/30/20/17 meters daily using CW only with an Elecraft K3 and KPA500 running 500 watts into verticals on the beach. QSL via LoTW or by the Bureau.

HR - Dave, VE3VSM will be active again as VE3VSM/HR9 from Roatan Island (NA-057) on 11-23 February. The primary purpose of his trip is Scuba diving. He will be QRV on 20 and 15 metres CW, including activity in the ARRL DX CW Contest. QSL via LoTW, or direct to VE3VSM.

JD1 - OGASAWARA. Operators Take/JA1UII and Kami/JH1HHC will be active as JD1BON and JD1BPH, respectively, from Komagari, Chichijima Island (AS-031), between February 25th and March 5th. Activity will be on 160-6 meters using CW, SSB, RTTY and FT8. QSL via their home callsigns, direct, by the Bureau or LoTW (end of March). Sorry e-QSL is not supported.

UA_ant - RI1ANC, the club station at Vostok Station (Antarctica), will be active again starting on 10 February. Look for activity on the HF bands, mainly FT8 with some CW and SSB. QSL via RN1ON.

VP5 - Bill, AC0W and Pat, K0PC will be active as VP5/AC0W and VP5/K0PC from Providenciales (NA-002), Turks and Caicos Islands on 12-17 February. QSL via home calls. They will operate mainly CW on 160-10 metres, and will participate in the ARRL DX CW Contest as VP5K (QSL via K0PC). The logs will be uploaded to LoTW and Club Log.

SOUTH PACIFIC TRIP ---> Will, AA4NC and Ron, AA4VK (https://aa4vk.com/) will be active on a holiday style DXpedition to the South Pacific as follows:
12-16 February TX4N and TX4VK from Tahiti, French Polynesia
18-20 February ZL/AA4NC and ZL/AA4VK from New Zealand
21-23 February VK9NR and VK9NN from Norfolk Island
24-27 February VK/AA4NC and VK/AA4VK from Australia
28-29 February P29NC and P29VK (requested callsigns) from Papua New Guinea
1-2 March H44NC and H44VK (requested callsigns) from Guadalcanal, Solomon Islands
3-5 March YJ0NC and YJ0VK from Vanuatu
6-10 March 3D2AA and 3D2VK from Fiji
Plans are to operate CW, FT8, FT4 and SSB on all bands. Look for TX4N and 3D2AA to participate in the ARRL DX CW and SSB Contests, respectively. QSL AA4NC calls via EA5GL, QSL AA4VK calls direct to AA4VK.
TI9A ---> The TI9A team was due to depart Puntarenas aboard the "Okeanos Aggressor I" on 30 January in the late afternoon (local time). They expect to reach Cocos Island after about 36 hours, indicatively around 12 UTC on 1 February. See https://dx-world.net/ti9a-cocos-island/ for updates.
NEW IARU WEBSITES ---> "For some time, all parts of IARU have been working to bring together the very different website styles of the three regions and the global site into one single global identity and brand for all four sites. At the same time, new material has been added to broaden appeal of the sites", Don Beattie, G3BJ (President, IARU Region 1) reported on 30 January. The new IARU Global and Region 1 websites are now up and running, the others will go live over the next several days. The three regional sites can be accessed direct from the IARU Global homepage: https://iaru.org/.