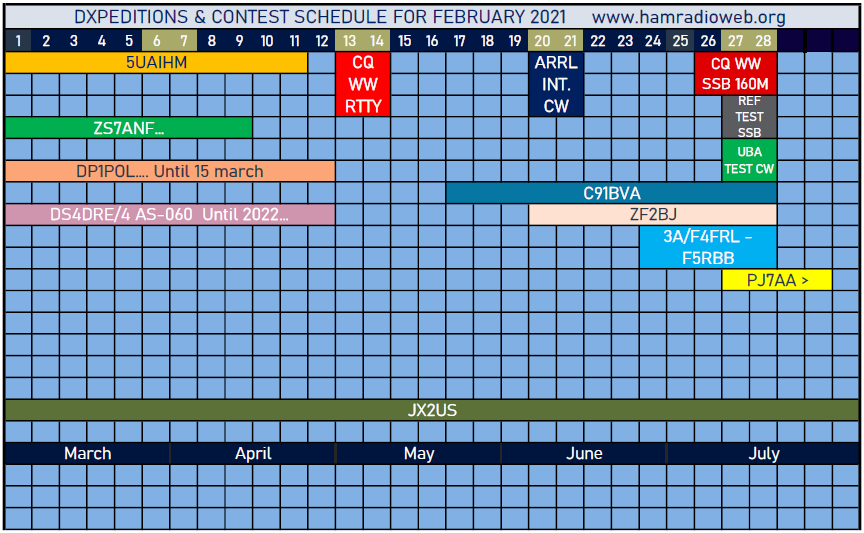 3X & 9L, GUINEA AND SIERRA LEONE. Jean-Phillipe, F1TMY, currently active as J28PJ from Djibouti, has announced via Twitter (https://twitter.com/J28Pj) that he will be active from Guinea (3X) and Sierra Leone (9L) sometime in September 2021. He also plans (possibly) to do some IOTA side trips to
AF-037 (in the Northern/Western Province Group) and AF-051 (in the Guinee-Maritime Province South Group). Look for more details to be forthcoming.

4A, MEXICO. Members of the Radio Experimentadores of Campeche will activate the special callsign 4A3G from the Champoton Lighthouse (MEX-093, WW Loc. EK49) between February 19-21st. Activity will include this weekend's 13th American Lighthouse Weekend and throughout the year 2021 in different amateur radio events. Operations will be on various HF bands, satellites and the Digital modes bands; as long as the propagation allows it. QSL via XE3AA or LoTW.

4UNR, AUSTRIA. QSL Manager Nick, UA3DX, informs OPDX that the members of the Amateur Radio Contest DX Club (ARCDXC, http://www.cqdx.ru/4u1a ) will NOT be using the special callsign 4UNR for "World Radio Day" from the 4U1A station at the United Nations Vienna International Center this year.

5V - 5V7DE is the newly issued callsign for Daniel, HB9EHD, who has been active as 5VDE from Kara, Togo since 11 February. He will be QRV on QO-100 SSB during his evenings, and on 40 and 20 metres FT8. QSL via LoTW and eQSL, or direct to home call.

C9, MOZAMBIQUE (Reminder). Bruno, CS7AMN, is expected to be active now as C91BVA from Maputo. Length of his stay is unknown. Activity will be on 80/40/20/15/10 meters using SSB and the Digital modes with an IC-7400 into End-Fed antenna. QSL via LoTW, by the Bureau (via CS7AMN), ClubLog or eQSL.

CE - Members of Radio Club Melipulli (CE7RCM) will be active as CB7FT from the lighthouse on Isla Tabon (SA-018) on 19-21 February for the American Lighthouses Weekend. They will operate SSB and digital modes on the HF bands. QSL via EA5GL.

DL - Special event stations DQ100JL and DR100JL will be active from 1 March to 31 May. The suffix stands for Junkers Luftverkehr, one of the earliest and largest airlines in Germany at the time, founded in 1921 as a division of the aircraft manufacturer Junkers. Also active will be club stations DA0FFR, DB0FFR, DF0FFR and DK0FFR. All QSOs will be confirmed automatically via the bureau. An award will be available, see https://100julu.de/ for information.

EA - URE San Fernando (EA7URF) will operate special callsign EG484FIM on 20-21 and 27-28 February to mark the 484th anniversary of the Spanish Naval Infantry (Fuerza de Infanteria de Marina). Formed in 1537, it is the oldest marine corps in existence in the world. QSL via EA7URF, LoTW and eQSL.

FM, MARTINIQUE. Romanic, W7ROM, is now active as FM4WDM from Le Morne-Vert. Activity has been on 15 meters FT8 using a FT-818 + LDG W817 into a W3EDP-style antenna; he also has a FT-450D. QSL via operators instructions.

FM, MARTINIQUE. Laurent, FM5BH, will be active during the ARRL DX CW Contest (February 20-21st) as a Single-Op/All-Band/High-Power entry. QSL via W3HNK or LoTW.

G - Celebrating Saint David, patron saint of Wales, the Welland Valley ARS will be active as GB0SD from 28 February to 2 March. QSL via G4XEX, LoTW and eQSL.

HL - Special event station D90EXPO will be active between 1 March and 17 October to promote the 2021 World Military Culture Expo that will take place in the city of Gyeryong on 1-17 October. QSL via LoTW or via DS3BBC; the logs will be uploaded to Club Log.

IS0 - Special callsign II0QSE will be active from Quartu Sant'Elena, Sardinia (EU-024) from 28 February to 30 June to celebrate the 40th anniversary of the local branch of ARI. QSL via IS0AGY, direct or bureau.

IS0, SARDINIA. Tibor, OM3RM, will be active as IS0/OM3RM from Sardinia (Remotely) during the ARRL DX CW Contest (February 20-21st) as a Single-Op/Single-Band (40m) entry. QSL via OM2VL, direct or by the Bureau.

JD1, MINAMI TORISHIMA. Take, JG8NQJ, will once again be active as JG8NQJ/JD1 from Marcus Island, Minami Torishima (OC-073, JCG 10007). He will go there starting March 10th or 17th, and be there for 3 months, but will not be on the air for about 2 weeks. He is usually there to work on the island's
weather station. Activity will be limited to his spare time. He will usually be mainly on 17 meters, but will also be on 20/15/12/10/6 meters using CW possibly RTTY), with a Yaesu FT-450 and 50W. QSL via JA8CJY or by the Bureau via JG8NQJ.

KP4, PUERTO RICO. Operators Ken/KP4AA and Will/AA4NC will be active as KP4AA from Cabo Rojo during the ARRL International DX CW Contest (February 20-21st) as a Multi-Single/High-Power entry. QSL via direct.

NP3, PUERTO RICO. Yuriy, N2TTA, will be active as NP3X from the Coamo Contest Club station during the ARRL International DX CW Contest (February 20-21st) as a Single-Op/All-Band entry. QSL via EB7DX.

OE21, AUSTRIA (Special Event). The Cornish Radio Amateur Club’s official International Marconi Day (IMD) Award program was canceled due to the Corona virus situation. However, the special callsign OE21M will operate between April 24-26th, 0000-2400z. to commemorate the anniversary of
Guglielmo Marconi's birthday (April 25th, 1874). QSL direct to: DokuFunk, OE21M, An den Steinfeldern 4A, Vienna A-1230, Austria. QSL by the Bureau via OE1WHC.

PY - Members of Scout team PY2GMR will be active as ZW2I from the Icapara Lighthouse on Ilha Comprida (SA-024) on 19-22 February. QSL via operator's instructions.

SV - Commemorating the 100th anniversary of the Revolution of 1821, the Radio Amateur Association of Western Peloponnese will operate special callsigns SZ21AD, SZ21GK, SZ21LB, SZ21PF and SZ21TK (the suffixes memorialize five prominent figures in the Greek War of Independence) as well as SZ1821R on 1-31 March. QSLs via LoTW and eQSL.

TY, BENIN. Ian, ZS6JSI, has been active recently as ZS6JSI/TY from Parakou about 400km north from capital city. He has been there since late January and is expected to be there for 6 months. Activity recently has been mainly on 20 meters FT8 around 1630-1700z and 2130-2200z. However, Ian has told OPDX that he operates mobile and can be on 80/40/20 meters using SSB and FT8. Equipment is an ICOM IC-718 transceiver with 100 watts into a ZS6BKW directional antenna pointed towards Europe and Africa and a Trap dipole directional towards the Americas. Ian states when time allows to look for him between 6:00pm and 8:00pm local time. He mentions, "I will confirm on
(https://logbook.qrz.com/), (http://qrzcq.com/) and I have applied for LoTW await the certificate." ADDED NOTE: Ian states that he operates from the Trans World Radio [TWR] (https://www.twr.org) gospel broadcast station in Parakou on 1476 and 1566 kHz.

VK5KI (OC-139) QSL STATUS. Grant, VK5GR, reports: For those looking for electronic confirmation from the VK5KI activation on Kangaroo Island (OC-139), the LOTW records were uploaded today (Feb. 15th) and the blackout period for ClubLog matching should be ending also.
Thanks again to everyone to gave us a call in January 2021. If you still want a paper QSL card - OQRS is open via my QSL Manager Charles, M0OXO.

VK9C - Ten members of the Northern Corridor Radio Group (namely VK6BMA, VK6EH, VK6EI, VK6KCC, VK6LOL, VK6MIT, VK6NU, VK6SJ, VK6SSB and VK6XI) will be active as VK9CE from the Cocos Keeling Islands (OC-003) on 16-23 March. "The trip is now set in stone", they say, provided they have "no more COVID scares between now and March 16th". They expect to be "quite active, but possibly not 24/7", on 80-10 metres (possibly 6m as well) SSB, CW and FT8 with two stations running up to 400 watts into vertical and wire antennas.
The logs will be uploaded to LoTW, eQSL and Club Log. Paper QSLs via EB7DX.

VK9W - The Hellenic Amateur Radio Association of Australia is planning a DXpedition to the Willis Islands (OC-007) which is scheduled to take place on 3-13 November. The team so far includes five operators (VK2IR, VK2OK, VK2PN, VK2RF and VK3YP) and VK9W is their requested callsign; if they cannot secure it, they will use VK9HR. More information is expected in due course. Willis ranks number 38 on Club Log's current Most Wanted DXCC list. The most recent operations were VK9DWX (2008) and VK9WA (2015).

VP5, TURKS AND CAICOS ISLANDS. Jim, K4QPL, will be active as VP5M from the Providenciales during the ARRL DX CW Contest (February 20-21st) as Single-Op entry. QSL via LoTW.

YB, INDONESIA. Hans, YB2DX, will once again be active during the CQWW WPX SSB Contest (March 27-28th) as a Single-Op/All-Band entry. QSL via LoTW or direct to his home callsign.

YU - On the occasion of the 70th anniversary of continuous activity of the callsign YU1ANO, the Serbian Administration has authorized the Belgrade Amateur Radio Club to use the special callsign YU51ANO from 15 February to 15 June. QSL via YU1EA.

Z8, SOUTH SUDAN. Massimo, IZ0EGB, is once again active as Z81B and working in Juba, South Sudan. Length of stay is unknown. Most of his activity has been on 20 meters SSB. QSL via IZ0EGA, ClubLog, eQSL and LoTW.

ZL, NEW ZEALAND. Operators Mark/ZL3AB, Geoff/ZL3GA and Phil/ZL3PAH will use the "Quake Contesters" callsign ZL3X during the ARRL DX CW Contest (February 20-21st) as a Multi-2 entry. QSL via LoTW, ClubLog or direct to ZL3PAH. No Bureau.

Iota News
NA-249. Members of the Vieques Island Amateur Radio Club will be active as NP3VI from the Conde de Mirasol Fort Museum on Vieques Island (PUR-015) during the 13th American Lighthouse Weekend. Activity will be on 80-10meters using CW, SSB and FT8. QSL via EA5GL.

OC-145. "The Daily DX" reports that there is a newly licensed radio amateur located on Ternate Island. His name and callsign is Heru Witanto, YG8VAS. Activity has been on 80/40 meters using
SSB, with an Icom IC-718 and 100 watts into his dipole. QSL via his home callsign.

SA-018. Members of the Melipulli Radio Club will be active as CB7FT from the TabonN Island Lighthouse (LH-0750, CHI-049) between February 19-21st. Activity will be on various HF bands using
SSB and the Digital modes, including the 13th American Lighthouses Weekend. QSL via EA5GL.

SA-055. Carlos, LU8DCH, will be active as LU8DCH/D from Martin Garcia Island (ARG-045) between February 20-22nd. Activity will include the 13th American Lighthouses Weekend. QSL via direct or eQSL.

SA-079. Members of the Brazilian Amateur Radio Emission League - LABRE/RJ will be active as PT1F from the Lighthouse on Rasa de Guaratiba Island between February 20-22nd. Activity includes 13th American Lighthouses Weekend. Operations will be on 80-2 meters and 70cm, using CW, SSB and FT8. QSL via the Burea (PY1AA), direct, LoTW and eQSL. ADDED NOTE: Wolf, DK1FW, states, "Like in the last 2 years PT1F will most likely not operate from SA-079 but from a mainland location with visibility to the lighthouse. This satisfies the requirements for lighthouse activation."

IOTA HONOUR ROLL ---> The 2021 Honour Roll and Annual Listings have been posted on the IOTA website https://iota-world.org/: click on PERFORMANCE LISTINGS in the dropdown menu under PROGRAMME INFORMATION. They show the position as at 31 January 2021.
The Honour Roll lists the stations with a checked score equalling or exceeding 50% of the total of numbered IOTA groups, excluding those with provisional numbers, at the time of preparation. The Annual Listing lists the stations with a checked score of 100 or more IOTA groups but less than the qualifying threshold for entry into the Honour Roll.
IOTA rules limit inclusion in the listings to those participants who have updated their scores at least once in the preceding five years (i.e. since February 2016) and have opted to have their scores published.